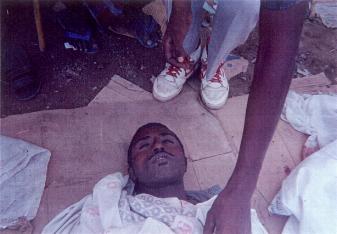 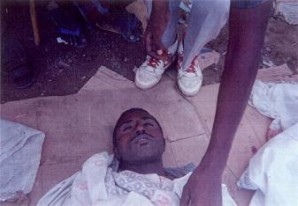 “Secretary of Defense Chuck Hagel met today with Djibouti President Ismail Omar Guelleh at the Pentagon. The Secretary was joined by Gen. Martin Dempsey, Chairman of the Joint Chiefs of Staff.

During the 30 minute meeting, the three leaders discussed regional security interests and bilateral issues including: counter-terrorism, and the details of the new 30-year land lease to support U.S. Forces at Camp Lemonnier.

Secretary Hagel reiterated the United States’ commitment and partnership for regional security in the Horn of Africa and efforts to prevent al-Qa’ida and al-Shabaab from threatening stability and the free flow of commerce. He also stressed the importance of the newly-established bi-lateral forum to discuss mutual security issues.

The Secretary lauded Djibouti’s contributions to the African Union Mission in Somalia and the leaders discussed current and future United States’ support for Djiboutian security forces participating in AMISOM.

The conversation ended with Secretary Hagel commending the courage of Djiboutian forces in operations against terrorists and thanking President Guelleh for hosting and helping ensure the safety of U.S. personnel in Djibouti.”

Note: Djibouti is a republic with a strong elected president and a weak legislature. The government’s human rights record remained poor, although there were improvements in several areas, including prison conditions, reduced incidents of prolonged detention without charge, decreased perceptions of judicial corruption, and expanded services for women who were victims of violence. Serious problems included corruption; official impunity; arbitrary arrest and detention; prolonged pretrial detention; interference with privacy rights; restrictions on freedom of the press, assembly, and association; and restrictions on unions. Female genital mutilation (FGM) also remained a serious problem.

Other serious violations of human rights in Djibouti include:

Arbitrary or Unlawful Deprivation of Life

Torture and Other Cruel, Inhuman, or Degrading Treatment or Punishment

Arrest Procedures and Treatment While in Detention

We called the Pentagon for comment and officials adamantly refused  to speak on the matter. So much for freedom of the press?