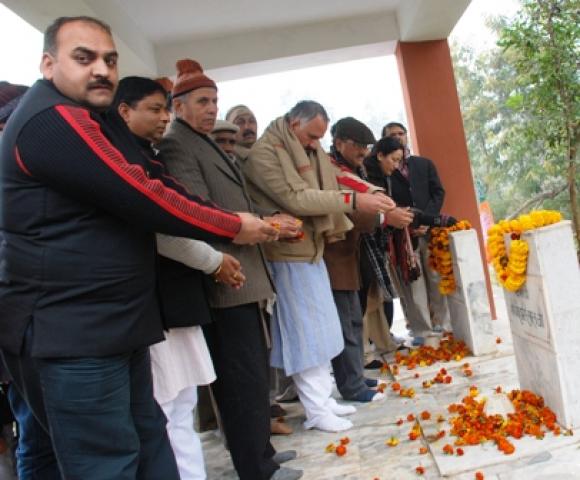 Jammu, January 11 (Scoop News) – BJP State President Shamsher Singh Manhas while paying tributes to Bhikam Singh and Behari Lal, said that our duty do not end by just assembling once in a year and remembering the supreme sacrifices of martyrs. We need to keep in mind that the noble cause for which these martyrs laid down lives in their youth still remains unfinished and we should not take rest till their dream of abolition of separate constitition and separate flag is not achieved. To achieve this, a long and decisive agitation is required and we all have to prepare ourselves for the same.

Shamsher Singh Manhas was addressing  a public rally organised by Hiranagar Mandal of BJP under its president Kirat Singh, in the memory of Bhikam Singh and Behari Lal the martyrs of 1953-Ek Nishaan, Ek Vidhaan, Ek Pradhaan agitation of Praja Parishad. Manhas alongwith other senior leaders laid wreaths at the memorial and later honoured the family members of these martyrs.

Manhas said, such an agitation has also become imperative in view of the recent developments in the state when the State Chief Minister is making utterances over the accession of the state. He said NC President Dr. Farooq Abdullah too is making such statements which have compelled the nationalist forces in the state to think as to  what is the future of nation loving people. He said the need of the time is to get united and display the unity to make Kashmiri leaders understand that till single nationalist person is alive in J&K, no force on earth can allow the dreams of separatists and anti-national forces fulfiled. He also criticiesd the Congress, both at the centre and in the state, of adopting a complete silence over the appeasement policy of the NC for the sake of power, thus compromising on the national interests.

National Executive Member Dr. Nirmal Singh, in his address, said that participation of youth in such programmes where sacrifices of the great patriotic people are remembered can prove to be a source of inspiration and induce a sense of nationalism in them. He said that tricolor could be hoisted in other parts of country after 1947 but in J&K it was only possible when a massive agitation was launched in 1953 and our numrous people got bullets in their chests while holding tricolors in hands making attempts to hoist them. Their sacrifices made it possible that we can hoist tricolor in the state. It becomes necessary to reach the masses and educate them about the resons behind supreme sacrifices of these martyrs. He also presented the facts of the history which prove that whenever there had been any challenge to the unity and integerity of the country, people stood like a rock and defeated the designs of the anti-national elements.

Senior leader Th. Ranjit Singh, while paying tributes , said that we feel pride of being born in Hiranagar which was the epicentre of historic agitation. He said that the two persons who laid down their lives during the agitation were in their early age and took the task of hoisting tricolor at any cost. Their such an approach was the indicator of the  their nationalist thinking and love for the motherland and its symbols.