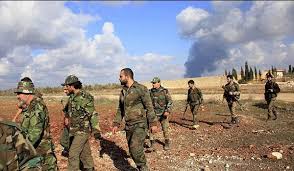 The Quds Force, the extraterritorial arm of the IRGC,Iran’s Revolutionary Guards

October 2015 proved to be a very sensitive period for the bloody wars in Syria. In this month Iran’s Revolutionary Guards (IRGC) orchestrated its forces for a decisive battle aimed at occupying the strategic city of Aleppo. A very difficult path had to be trekked to reach this demanding objective, along with other clandestine goals. The Quds Force, the extraterritorial arm of the IRGC, had from long ago launched a widespread troop recruiting campaign to dispatch Iraqi Shiite militias and Afghan mercenaries linked to the so-called Fatemioun Division fighting alongside the Lebanese Hezbollah to attack Aleppo. Despite all this effort and escalation, Aleppo is becoming a very difficult bite to swallow for Iran and its affiliates.

A few months ago IRGC Brigadier General Iraj Masjedi, a senior Quds Force commander, travelled to Iraq from Iran and convinced Shiite militia leaders to join the recruiting effort for Aleppo. Iran had prepared a plan to dispatch nearly 5,000 Iraqi Shiite militia members dispatched to Syria by the summer of 2015. However, this was only the beginning of the troop transfer operation. Masjedi also prepared a large number of IRGC and affiliated paramilitary Bassij members for the Aleppo front. These forces comprised of a mixture of young and inexperienced recruits that would play the role of “disposable soldiers”. Elite Quds Force members of the ‘Saberin’ units – aka Iran’s shock troops trained for special ops and extraterritorial missions – were also used in this offensive.

Operation Aleppo began marking a very sacred month for Shiites in the Muslim calendar when they carry out rituals and different ceremonies for the slaying of a sacred figure, Imam Hossein, the grandson of Prophet Mohammad. For this particular reason the Aleppo mission was dubbed by Iran as “Harsh Revenge” or Operation “Moharam”. However, the operation advances did not exactly go according to plans. The IRGC forces suffered heavy losses, most important of which the death of Brigadier General Hossein Hamedani, commander of the Quds Force in Syria.

IRGC casualties continued to pile up until late December and resembled a devastating defeat for the Quds Force and IRGC in their aim to occupy Aleppo. The loss of a number a senior IRGC and Shiite militia commanders have to this day delivered major blows to their troops’ spirits, and caused major disruptions in their planned advances.

To compensate these defeats the Quds Force began dispatching more Iraqi Shiite militias from groups such as Asaeb Ahl al-Haq, Kata’ib Hezbollah and al-Nijba. However, these forces also began to suffer severe casualties and were actually making the situation on the ground even worse for Iran. In mid-November a significant number of these Shiite militias were seen killed in areas near Aleppo. Amongst all these setbacks, reports of Quds Force chief Qassem Suleimani getting wounded in Syria acted as a major wakeup call for Tehran. Suleimani was a key military figure close to and trusted immensely by Iranian regime leader Ali Khamenei. As a result, the IRGC assault tactics aimed at easily and quickly taking over Aleppo failed miserably.

The reason behind the Iranian regime’s defeats in attacking Aleppo can be summarized in the following elements:

The battlefield in Syria is completely different in comparison to Iraq. These grounds are unfamiliar and considered rough terrain for Iraqi Shiite militias and IRGC Bassij forces. Irregular topography and hilltops covered with trees, along with tight roads and stems in Syria are naturally a completely different story in comparison to the desert, flat and dry lands found in Iraq.

To make matters more difficult is that IRGC forces use new recruits to break through defensive lines, the same tactic used by Iran against Iraq back in the 1980s. Based on these maneuvers the Bassij forces were used as cannon fodders in efforts to gain short-lived victories. However, the serious and strongly motivated forces of the Syrian opposition showed to be a major obstacle for these forces, and inflicted major casualties to Iran-associated units’ ranks and files.

The third element were the Syrian opposition forces themselves, who enjoy being local and having the necessary knowledge regarding the ground and climate conditions. Their units resorted to tactics such as ambushes and tactical attacks, along with precision missile attacks to inflict severe casualties to Shiite paramilitary forces and Iran’s IRGC units. In one case alone in mid-December Asaeb militants fell into a Syrian opposition ambush near Aleppo resulting in over 80 of their members being killed, wounded or taken captive.

The fourth factor is the lack of coordination between Quds Force and Shiite militants with Assad forces and Russian air support, all causing further problems in the use of different units rallied for this particular battle. IRGC forces were seeking to take advantage of non-stop Russian air strikes to quickly take over Aleppo and occupy and eventually destroy this important northern Syria city, dreaming of a scenario similar to Baiji and Tikrit. However, the discord of various troops dispatched to a vast and scattered battlefront was the main element behind all the weakness and defeats. Practically, only a few days after launching their initiative the attacking forces were forced to end their assault phase, and desperately begin a phase of defensive measures and retreats.

This saga renders a harsh conclusion as Quds Force commanders, in this stage, suffered a major defeat in Aleppo. Due to the high number of casualties amongst IRGC, Iraqi Shiite militias and Afghan mercenaries around Aleppo, Iran was left with no option but to halt the entire operation and withdraw its forces. Although small units have remained on the ground to deny any reports of a humiliating defeat, they are completely worn out and have no capability to meet the odds in the intense Aleppo battlefront.

Of course, Quds Force commanders are attempting to portray this retreat as a reorganization and reconstruction of its forces on the ground, while it is crystal clear that an operation that began as “Harsh Revenge” ended in “Harsh Defeat”.

One can now conclude that Aleppo has become a bloody quagmire for the terrorist Quds Force and its Iraqi Shiite militia mercenaries. Furthermore, relying on Russian air support in Aleppo cannot be a serious and influential factor in turning the page and shifting the military balance of power on the ground.