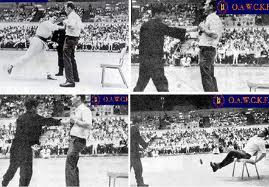 The power behind Bruce Lee’s fighting method was “chi” power which dramatically increased the power and force of his punches and kicks. Pictured here a demonstration of the sheer force of his once inch punch literally sends a guy flying across the room.

Part of what makes Bruce Lee’s fighting method (JEET KUNE DO) so incredibly effective is its unusual mix of techniques, power training exercises and “Chi Sao.”

“Chi Sao” is concerned with the development of “energy” within the human body that extends out through the limbs.

This “energy” (or force) can be “harnessed” and  “controlled” and used in such a way as to dramatically increase the power and force of your punches and kicks.

Some say it was the real secret behind his knock out blows.

Surely anyone who has ever witnessed Bruce Lee preform his famous “one inch punch” can attest to the sheer power of his punches. The force behind this force was “chi” energy (see video: Bruce Lee amazing Kung Fu one inch punch http://www.youtube.com/watch?v=oRf49fMVOLE).

He also used the same “chi” energy in his powerhouse kicks (see video: Bruce Lee – Fastest kicks ever seen in the world! http://www.youtube.com/watch?v=vVd0wLrZDJs).

Bruce Lee’s fighting method is perhaps the best system ever devised because it emphasized simplicity, speed and flexibility exercise with precision timing for lethal effect.

In many ways JEET KUNE DO is a very practical style of martial art because he stressed the teachings of right forms – such as the basic fighting stance.

His style of martial art was also very scientific.

“JEET KUNE DO – does not beat around the bush. It does not take winding detours. It follows a straight line to the objective. Simplicity is the shortest distance between two points” (Source: The Tao of Jeet Kune Do”, by Bruce Lee.

Today his unique teachings, philosophy and fighting style live on in the martial art he specifically created and developed over time.