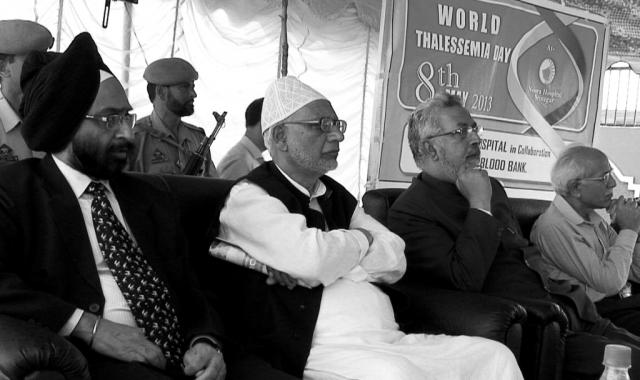 Srinagar, May 8 (Scoop News) – Minister for Medical Education, Youth Services & Sports,  Taj Mohi ud Din today disclosed that Government has released Rs. Five crore for the medication and treatment of patients suffering from Haemophilia and Thalassemia in the State.

Addressing a function to mark the World Thalassemia Day today, the Minister said historically these diseases were confined to aristocracy of Europe and elsewhere and Czar of Russia suffered from Haemophilia. But, he said, with the mixing of populations over times these diseases have also travelled.

The function was organized by a private hospital.

Taj underscored the need for blood donation and hailed the voluntary groups doing this yeoman service. He said since blood can’t be manufactured, voluntary donations are the only means to help the dying patients and those suffering from these diseases.

The Minister said there is a dire need to offload the tertiary care hospitals so that these institutions devote their time and energy on research and treatment of difficult diseases like Haemophilia and Thalassemia. He said patients with minor ailment from far off area need not to come to tertiary care hospitals which can be easily handled at District and Sub District Hospitals. For this, he suggested that the confidence of common masses in primary and secondary care units needs to be built.

The Minister  said Government would welcome the entry of private players in setting up health institutions in the State which would help in overcoming the rush in Government hospitals.