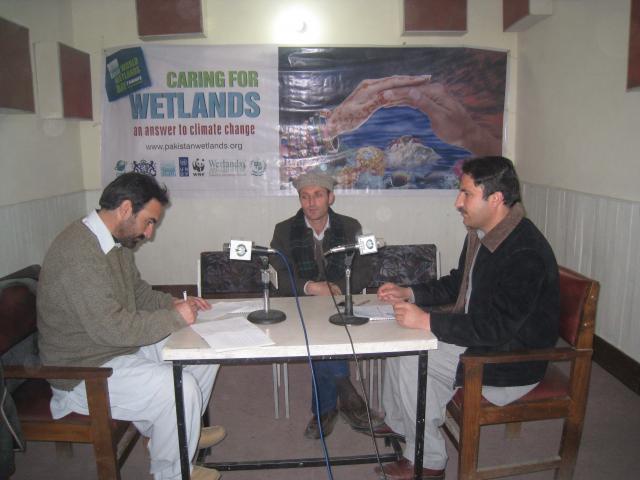 CHITRAL: The Pakistan Wetlands Programme (PWP) is an initiative of the Federal Ministry of Environment (MoE) being implemented by the World Wide Fund for Nature Pakistan (WWF Pakistan) that aims to conserve globally significant wetlands of the country. The programme activities focus to achieve two objectives; Creation of an enabling environment through capacity building, awareness raising, and policy planning; and To develop replicable demonstration models in representative wetland eco-regions of Pakistan. For the last 4 years the Northern Alpine Wetlands Complex component of PWP in collaboration with the local communities has been actively involved in ensuring the conservation of biological significant wetlands in Broghil valley of Chitral through identifying and providing alternate sources of domestic energy, organizing awareness and outreach programmes and building capacity of the local communities in better utilization of available natural resources. World Wetlands Day:
Each year world Wetlands Day is celebrated on February 2. It marks the date of the signing of the Convention on Wetlands on 2 February 1971, in the Iranian city of Ramsar on the shores of the Caspian Sea. World’s Wetlands Day was celebrated for the first time in 1997 and made an encouraging beginning. Each year, government agencies, non-governmental organizations, and groups of citizens at all levels of the community have taken advantage of the opportunity to undertake actions aimed at raising public awareness of wetland values and benefits in general and the Ramsar Convention in particular.
The proposed theme for WWD for the year 2010 is "Caring for wetlands-an answer to climate change. In Pakistan World’s Wetlands Day celebrated under the patronage of Pakistan Wetlands Programme. Each year on Feb 2nd the Pakistan Wetlands Programme organizes different events to celebrate the WWD in district Chitral. The primary aim of these events is to highlight issues faced by wetlands in district Chitral and earn local support for wetlands conservation through enhancing the awareness level of the local masses. To celebrate the World’s Wetlands Day (WWD) the Northern Alpine Wetlands Complex-Pakistan Wetlands Programme organized following events in district Chitral:
Events organized in District Chitral and Broghil valley of Chitral in connection to Worlds Wetlands Day:
On the occasion of WWD a Radio interview of Ahmad Said, Site Manager, Northern Alpine Wetlands Complex-Pakistan Wetlands Programme was recorded and broadcasted from Radio Pakistan Chitral. In his interview  Ahmad Said highlighted the socio-economic importance of wetlands in Chitral context. He also highlighted the issues faced by water bodies/wetlands in district Chitral and appealed to the local populace of Chitral to join hands with Pakistan Wetlands Programme to ensure prudent use of wetlands and associated resources. In his interview he said that Chitral is one of the famous migratory routes for the seasonal migration of waterfowls and each year hundreds of thousands of waterfowls uses this route for their biannual seasonal migration to breeding grounds and back. He appealed to the hunter community of district Chitral to observe certain ethics while hunting waterfowls. He further said that waterfowls are indicators of wetlands health and healthy wetlands are the sign of healthy people. So we must keep our wetlands healthy. At the end he highlighted the activities of Pakistan Wetlands Programme carried out in Broghil valley connection to wetlands conservation and management.
Besides, banners carrying conservation messages and highlighting the importance of wetlands were also displayed in in main Chitral Bazzar.
Due to unprincipled and uncontrolled hunting waterfowls population is on the decline in the world. In order to enhance awareness level among the common masses in general and hunting community in particulars the Pakistan Wetlands Programme in collaboration with its partners have developed leaflets encompassing basic facts about wetlands/waterfowls and have chalked out certain principles and ethics to motivate hunting community to observe rational hunting of migratory birds with special emphasis on waterfowls. These awareness materials were disseminated among the hunting community of Chitral with aim to motivate them to observe prudent hunting without compromising on the health of wetlands.
On the eve of worlds wetlands day cultural show and essay writing competition among the students of Broghil schools were also carried out with the aim to boost public awareness regarding wetlands issues.