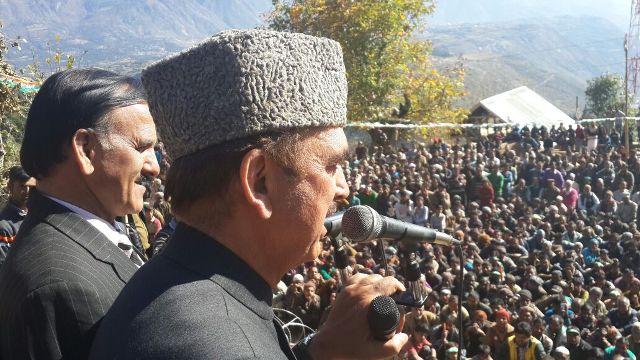 Inderwal/Bhaderwah/Ramban,November 20, (Scoop News)-Launching a blistering attack on BJP for taking a U-turn on issues like Article 370, Leader of Opposition in Rajya Sabha & Former Chief Minister said that BJP and its earlier incarnations have been using such sensitive issues to flare up passions and exploit the sentiments of the people of the country in general and Jammu in particular, and today they seem to have sold the trust of the people by asking them to forget for the sake of gaining power in J&K.

Azad said that BJP has always betrayed the trust of the people of Jammu and the most recent and glaring example of this betrayal was the cross voting of seven BJP MLAs in the MLC elections.

Asserting that the people of J&K are slowly getting aware about the divisive and dual-faced politics of BJP, Azad said that the U-turn of BJP on Article 370 should leave none in doubt about the hunger of BJP to gain power.

He said, “People of Jammu & Kashmir, especially Jammu, feel cheated by the opportunistic politics of BJP and it is the ruse of BJP to hide under the grab of ‘national issue’ which no one in J&K is going to buy, and certainly they will be given a befitting reply by the people of the State”.

Lauding the Congress Party for having a consistent and practical stand on issues like Article 370, Azad said that we have the satisfaction of never having tried to befool people for the sake of votes and gaining power, and that we have tried to promote inter-regional harmony and communal amity as against BJP which thrives on discord, divisiveness and polarization.

“Congress Party empowered Jammu & for the first time ensured a fair and equitable treatment to all the regions of the State, and I feel sorry that BJP cheated the people of Jammu in the name of Article 370, only to leave them floundering for the sake of attaining power”, said Azad.

Castigating the BJP for openly hobnobbing with separatists and having under-the-table parleys in its desperation to attain power at any cost, Azad said that people have taken note of the somersaults and opportunistic politics of BJP.

Azad said that politically conscious and aware people of J&K cannot be duped by the contradictory stances the BJP is taking on various issues keeping in view the political expediency, adding that their nefarious designs will be defeated by the people with full force.

Countering the propaganda and canards being spread by the BJP about the rehabilitation of Kashmiri Pandits, Azad said that they are misleading the people by trying to float the impression as if something is being done for the first time, adding that he as Chief Minister of J&K, in a very short span of time, took real and meaningful steps for the rehabilitation of Kashmiri Pandits and that it was the UPA Government which sanctioned a financial package to this effect.

Azad said that after stupendous efforts of Congress Party in persuading the National Conference, State Government had recommended a package for the POK refugees, and NDA Government has trashed the whole issue only for the sake of vote-bank politics.

“I want to tell the people of the State, especially the intelligentsia that those who have survived on perpetuating inter-regional tensions and pitting one community against another, cannot lead the State on the path of progress and prosperity, and Congress Party has the capacity to satiate and accommodate the urges and aspirations of all regions and sections of the society”, said Azad.

He said, “Congress-led coalition Government set examples of good governance and fast-track execution of developmental programmes as also ensured that all regions and sections of the society are treated with equity, fairness and justice and that this achievement remains the strength and vitality of the Congress Party”.

Describing the urge and awakening, that was infused in the minds of the people vis-à-vis the goal of development, as the most remarkable achievement of Congress-led regime of 2006-08, Azad said that Congress Party amply demonstrated to the people of the State how big projects can be executed in the shortest possible time and that development’ as a discourse won acceptability in the polity of the State.

“It is this mantra of ‘development’ and good ‘governance’ which we are presenting to the people of the State for seeking fresh and decisive mandate”, said Azad.

Asserting that the sanctioning of five medical colleges, five Cancer Institites and ‘National Institute of Medicinal Plants’ at Bhaderwah, two state-of-art Maternity Hospitals, in addition to upgradation of numerous hospitals, CHCs, PHCs, and setting up of new sub-centres in the State will transform the health sector of the State in the coming days, Azad said that as Health Minister, he also took a landmark decision of doubling the allocation of three Hill States of Himachal Pradesh, Uttrakhand and J&K under NRHM and this is hugely going to benefit the people of J&K.