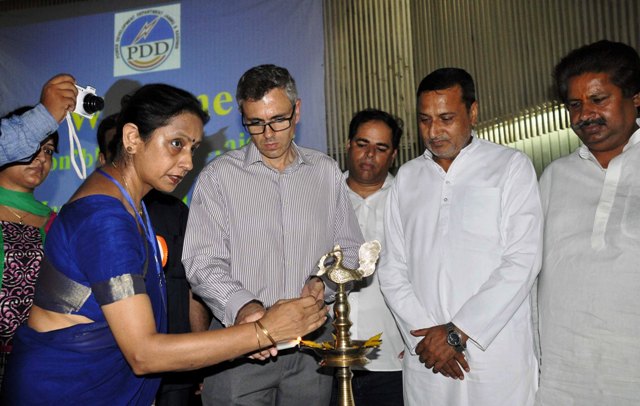 Jammu, June 16 (Scoop News)- Chief Minister, Omar Abdullah Monday reaffirmed the determination of his Government to revolutionized the power generation in the State and provide upper hand to Jammu and Kashmir in energy availability.
“The Government has put in place an ambitious and stupendous power generation programme to achieve self-sufficiency in it and catapult State’s economy and financial health”, he said and added that people will remember our Government for this historic initiative when they will reap the fruit in this regard in near future.
The Chief Minister was launching 2nd phase of Re-structured Accelerated Power Development Reforms Programme (R-APDRP) for Jammu division to tone up the power supply system in the city and eleven towns of Akhnoor, Bhaderwah, Doda, Jammu, Kathua, Kishtwar, Poonch, Rajouri, R. S. Pura, Samba and Udhampur to benefit 237002 consumers on account of power supply and distribution.
The Chief Minister recently launched a similar programme in Srinagar for Kashmir division to benefit 256679 consumers under the R-APDRP.
Two Data-cum-24X7 Consumer Care Centres have also been inaugurated by the Chief Minister under this Programme at Jammu and Srinagar for the facilities of the consumers.
Omar Abdullah said that dozens of power projects in the various stages of execution will accrue benefits to the people in near future. He said these will make the State self-reliant in power generation to meet its domestic, agricultural and industrial needs besides enabling it to sell the surplus energy and earn substantial revenue for meeting development requirements in all sectors.
The Chief Minister castigated those who want to do politics on development issues and mislead people carrying the bogie of false propaganda. He said equitable and inclusive development of all the regions and sub- regions has been benchmark of the development policy of the Coalition Government and the holistic development all across the State is witness to this determination of the Government.
Omar Abdullah said that certain politicians have made it their trait and fashion to pretend to be the best friends of people while facing cameras but they never talk of any public good in the forums and Government meetings.
It may be mentioned that power sector particularly generation, transmission and distribution has registered significant improvement during the last five years. Besides commissioning 450 MW Baglihar-I, small projects like 0.5 MW Bhaderwah Unit-III, 1.5 MW Pahalgam Unit-III and 1.26 Sanjak Power Projects have also been commissioned during the last five years in the State Sector. In the Centre Sector 120 MW Sewa-II, 240 MW Uri-II, 45 MW Nimu-Bazgo and 44 MW Chutak Power Projects were also made operational in the same period resulting in adding 900 MW of power in the system. In addition projects with total capacity of 32.5 MW were commissioned in IPP Mode which include 7.5 MW Brenwar, 10 MW Tangmarg and 15 MW Rajnala Dunandi.
Power Projects with total capacity of 1400 MW which include 850 MW Ratle, 450 MW Baglihar-II, 37.5 MW Parnai and 48 MW Lower Kalnai are under execution in the State. The 450 MW Baglihar-II involving the cost of over Rs. 3113 crore is likely to be commissioned in September 2015.
Bids for the projects with an installed capacity of 2220 MW are under evaluation and the work on these projects is likely to commence soon. These projects include 390 MW Kirthai Stage-I, 93 MW New Ganderbal, 1000 MW Pakal Dul, 660 MW Kiru and ten more projects with the capacity of 77.80 MW under IPP mode.
The State has registered 200% increase in self generation in the last five years from 879.34 million units in 2007-08 to 2560 million units now. Jammu and Kashmir Government has also been allocated a coal block in Odisha which will add about 600 MW of thermal power in the system.
The Chief Minister has directed the Power Development Corporation to move forward on studying the feasibility for the construction of Baglihar-III utilizing the availability of existing infrastructure. He has also directed for finalizing the arrangements for joint venture for utilizing the allotted coal block so that Jammu and Kashmir gets another fillip in the power generation sector.
READ MORE AT http://scoopnews.in/det.aspx?q=38587