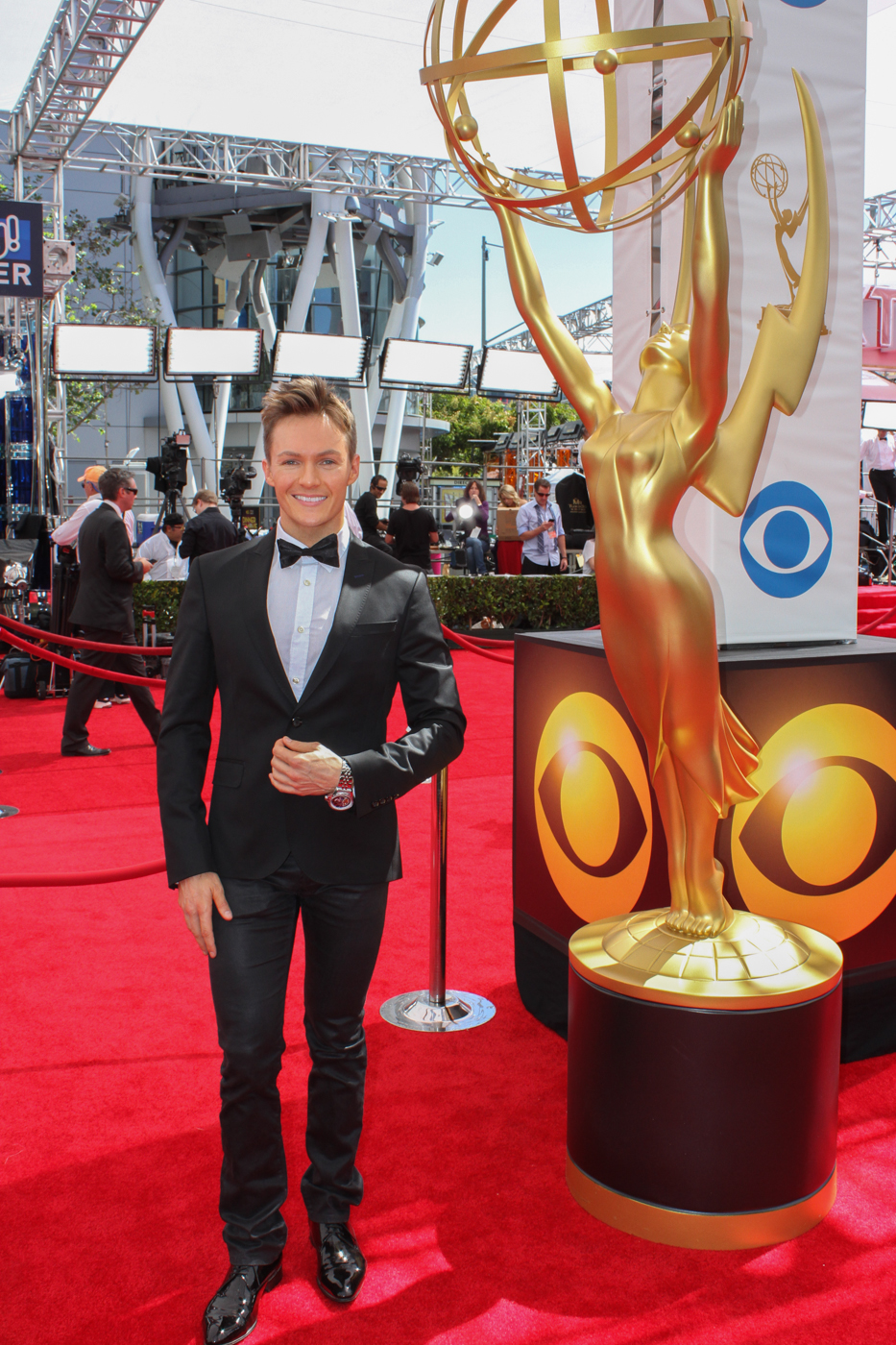 Dean McCarthy was one of the lucky few journalists given backstage access to The 57th Grammy Awards this year, interviewing some of music’s biggest names for top Australian TV and radio program, Scoopla. He’s become a regular on the Hollywood A-List scene, but the star studded red carpets are a world away from his humble upbringing on a small farm in the middle of Australia. The well dressed and meticulously presented reporter calls himself “Australia’s Hollywood Insider”, delivering the latest entertainment news on TV and radio programs back in Australia from his home base in the Hollywood Hills.

The 30 year old confesses that it’s his Aussie charm that’s helped him crack the door to tinsel town. “Being Australian helps break the ice with the A-listers. They hear the accent and instantly relax, that’s why I get such great interviews out of them”.

So how does someone go from outback Australia to the top A-List events in the world? Well it all started with an overly ambitious 14 year old, who was determined to have his own radio program.

“I convinced a radio station in Australia to give me my own radio show when I was 14. Obviously it was unheard of that a school kid would have his own show, but I sure did. When most kids went to play after school, I took my little back-pack of CD’s and headed to the radio station”.

The determination didn’t stop there. Dedicated to his studies, Dean completed a bachelor of Business at the exclusive Queensland University Of Technology, while reviewing movies on BRIZ 31’s Cinema. It was during an episode of Cinema that the producer of Brisbane’s highest rating radio program spotted the talented youngest, and offered him his first big break – reviewing movies on The Labrat, Camilla and Stav Show. “I couldn’t believe it. I was cast as the movie reviewer for B105 and it really was when my dream came true. I would attend private screenings of films and then review them live on air”.

Being heard on radio was still not enough for the driven college graduate, who then negotiated his own deal to become the face of theme park, DreamWorld. He confesses the attention was overwhelming at the time. “ I didn’t really know what I was getting myself in for as the face of DreamWorld, but everywhere I went, there I was. Billboards, busses, banners, I was even on pizza boxes. My face was everywhere”. The two-year contract ensured that there were few Australian’s that hadn’t seen Dean’s face at some point.

When The Dirt TV became a syndicated prime time TV show, Dean was catapulted into the spotlight yet again. Entrusted as the key Australian Hollywood correspondent, Dean then became the go-to for all things Hollywood. Southern Cross Austereo is now the largest entertainment group in Australia and Dean is considered one of their greatest talent finds.

“I feel a lot of responsibility working for Southern Cross Austereo because it is such a high profile group. They need and expect the absolute best every day from me, so I work very hard to deliver”.

Since becoming the Hollywood go-to, Dean has interviewed some of the biggest names around and attended every major award show on the calendar. His resume reads like a who’s-who of Hollywood. Tom Hanks, Jennifer Lawrence, One Direction, Liam Hemsworth, Woody Harrelson, Jennifer Aniston, Christian Bale, just to name a few.

A true professional, he refuses to share too much about any of the Hollywood ego’s that he has encountered, but he did confess to a couple of awkward interview moments.

“Harrison Ford refused to answer my questions and Christian Bale slammed the company I was working for during our interview. But other than that, I have no complaints.”

His recent Grammy’s coverage aired on Australia’s leading radio network, The Today Network, and cemented him as the fresh new face on the Hollywood scene.

As the biggest fish in the Australian pond, the down to earth Aussie plans on making his mark in Hollywood, recently joining the prestigious Beverly Hills Lifestyle Magazine as their entertainment reporter.

“I am beyond excited about working with the Beverly Hills Lifestyle Magazine. They are the epitome of prestige and the magazine is the most beautiful book I have ever picked up.”

We eagerly wait the next steps if this rare and unique talent.