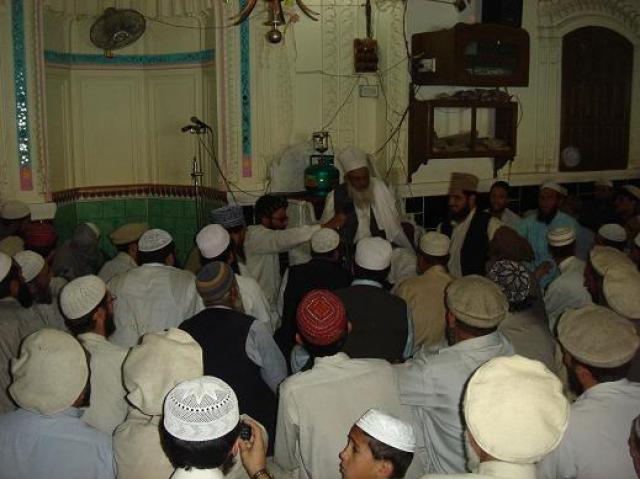 CHITRAL: Islam never oppose of modern education but it stressed upon to Muslims to must get modern education along with Islamic knowledge. These views were expressed by Dr. Qari Ahmad Mian Thanvi Naib Mohtamim (vice Principal) of Jamia Darul Uloom Islamia Lahore (a Lahore based religious teaching institution). He was addressing in Friday sermon and Qirat session. The Qirat session was organized by monthly Nawai Chitral Lahore in Shahi Masjid (Mosque) Chitral.  Earlier that Qari Wiqar Ahmad Chitrali read the Holy Quran in a very sweet tune. Later on Dr. Qari Ahmad Mian Thanvi presented Qirat (recitation from the Holy Quran) in 7 different Qirat styles. A large number of faithful enjoyed his Qirat and enhanced their religious spirit. Addressing to Mihfali Qirat (Qirat session) Dr. Ahmad said that Islam never oppose of modern education but it stressed upon getting of latest education and research. He said that a strong and learned Muslim is most liking by Allah Almighty than a poor and illiterate one. He said that Muslims have abandoned getting of modern education and research and that is why they are crushing in the world. He stressed upon the Muslims to must come forward and get modern education as well as must be involve in research. He said that Quran is foundation of all knowledge and you should to must read its translation to explore hidden gestures for Muslims.

He said that I have established a model religious institution where there also imparting modern education and students of Jamia Darululoom Islamia Lahore are qualifying MA, MSc. MBA, M. Phil and even P.hd. He said we never track on development until we not accept challenges of modern era and not get modern education of science and technology. He said that some traditional Mulvis also opposed of my Institution but I never care of their oppositions and opened my Madrasa where there more than 1500 students of different are reading in different categories. He said that some 250 Jobless people of different universities and colleges are committing suicides but no one qualified from Religious Madrasa committed suicide because he gain his livelihood with a honest way. He offered all the Muslims to send their children after passing their primary education and Hifzul Quran to his Darul Uloom and they will be relieved after qualifying their Islamic and Modern education both. A large number of people attended Qirat session.