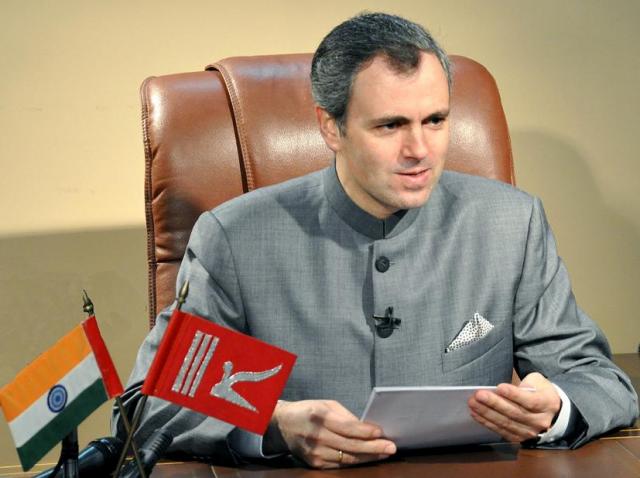 “The institution of Interlocutors created by the Union Government to initiate interaction with all shades of opinion should be utilized earnestly to find out solution to the issues”, he said and appealed the separatists to rise to the occasion and play their role in bringing about peace and tranquility in the State.

In an address to the people on the occasion of Republic Day the Chief Minister reminded the people of the loss of precious lives and property during the period of militancy and in five months of stone pelting and said that violence and law and order situations have never solved any problem.

Omar said during my electioneering in 2008 Assembly Elections ‘I have sought the cooperation and vote from people for development and progress of the State’, but soon after taking over as Chief Minister of the State, ‘I utilized every opportunity to highlight the resolution of political issues politically’. “It was me who vehemently and categorically raised the political issue of before the Prime Minister Dr. Manmohan Singh and UPA Chairperson Sonia Gandhi at a huge public rally stressing on addressing these issues politically. Not only this I utilized other important forums to call for focusing political issues of in a conducive and political atmosphere”, he said.

“While I thanked the Union Government for the liberal financial assistance on development front, I emphasized the need for sustained and meaningful dialogue to address political issues of the State”, he said and added that the unabated efforts by his government in this direction have started yielding positive results and the appointment of Interlocutors to discuss JK political issues and suggest measures to their resolution is now a reality.

The Chief Minister said that the last two years of the coalition government has created a shining example of working in tandem and oneness. “We have addressed issues openly and jointly and made decisions unitedly. Our political opponents tried their best to circulate stories about the working of the coalition but people in the State witnessed the unity in the coalition partners to run the State with high standards”, he added.

“My endeavour is to improve the political and developmental scenario in the State but transformation of a society which has witnessed 20 years of disturbance and 60 years of political upheaval could not be achieved through a single stroke”, he said and reiterated his resolve to seek equitable development in all regions and sub-regions of the State.

The Chief Minister said that during electioneering he had talked about tackling employment crisis effectively and in this direction launch of Sher-i-Kashmir Employment and Welfare Programme for Youth (SKEWPY) is an important step. He said 4 lakh unemployed persons have been targeted to be helped to get employment under SKEWPY. He asked the youth to get best advantage of the scheme and make their future brighter.

Omar said that under SKEWPY 16,000 unemployed youth have been provided Voluntary Service Allowance (VSA) and expressed hope that these will render service to the society wherever required. He said in the government sector his government has provided jobs to 25,000 persons during last two years while 43,000 casual engagements have also been approved.

The Chief Minister said attention is being paid on enhancing the employability and skills of youth to make them fit for open market jobs. “We are opening 18 new polytechnics and one ITI centre in each block of the State to give new dimension to the skills development programme”, he said adding that the most required trades and technical courses with greater market demand will be taught in these institutions.

The Chief Minister said that the power crisis has been inherited by his government and the sector requires huge finances and time to be improved to meet the requirements of the people. “My government has initiated both short and long term measures to improve and upgrade the power generation and supply mechanism in the State. We have framed a policy for PPP ventures and are working to involve investors in the field”, he said and referred to the awarding of 690 MW Ratli Power Project on tariff bidding and creating a new example of transparency.

The Chief Minister also referred to the creation of Chenab Power Company and entering of joint ventures with NHPC and PTC for establishment of 1000 MW Pakaldul, 600 MW Keru and 520 MW Kawar projects to give considerable fillip to the local power generation. “Our transmission and distribution losses are very heavy and power theft and disregard of load agreements add insult to the injury. In order to address this aspect government is working with TERI on a Rs. 5800 crore power distribution and reforms project”, he added saying that his government would work for providing considerable relief to the people on this front during next four years.

Omar said that with the liberal assistance by the Union Ministry for New and Renewable Energy (MNRE) the State government is endeavouring to harness hundreds of mega watts of power from non-conventional energy resources in the State to electrify far flung and remote areas.

On health sector, the Chief Minister said that State has been ranked No. 1 in the delivery of primary health service for its commendable work done despite law and order situation. He said, “We are out to fast track health infrastructural development and equip hospitals and health centres with better medicare gadgets and service”. He said many hospital buildings have been completed during the last two years and the completion of many more is in offing. “We are also looking for public-private-partnership to establish hospital with supper specialty disciplines”.

On e-governance, the Chief Minister said that introduction of video conferencing for monitoring works regularly and the creation of Awami Mulakat institution besides Grievance Cell in his Secretariat has kept him posted with latest details of development and public needs. “These have also prompt response by the administration to public needs and are widly appreciation. He said during 2010 as many as 25 Cabinet meetings were held to make decisions on important public issues and give nod to development schemes. “Besides my Cabinet colleagues, I have myself attended 9 large district level Awami Mulakats and scores of smaller public darbars to meet the people and ascertain first hand information about development scenario and public grievances. I have also addressed more than 100 public meetings and citizens interaction sessions during last two year”, he said adding that the Ministers and the Administrative Heads have been directed to make Awami Mulakats and public interactions as an integral part of their day-to-day official business.

The Chief Minister said that on the road sector the focused attention of government is vindicated by the launch of schemes for construction of tunnels and inter-district and inter-provincial highways. “We have completed 177 road projects and 141 bridges of various dimensions during the last two years while 10,000 kms of roads have been black topped during the same period besides macadamizing almost all main roads in Srinagar and Jammu cities”, he said.

The Chief Minister said that steps are also on to improve and upgrade the education sector. “The sectors of higher education and technical education are receiving focus for holistic development and introduction of subjects in demand in the open market”, he said. He also said that PHE and Irrigation sectors were receiving due attention in the development policy of the government and added that agriculture development has been flagged as important sector. “We launched Saffron Mission and established Kissan Board to address the problems of farming community”, he said and cited the example of organizing various Kissan Melas to educate the farmers in latest farm technology.

The Chief Minister also referred to the damage caused by flash floods in Ladakh and appreciated the Centre Government’s assistance to the State to ensure rehabilitation and restoration programmes before the onset of winter.

Omar called for large scale participation of voters in ensuing Panchayat and local body elections describing it most essential for constitution of basic democratic units for all round development of the villages and towns. He appealed the women voters to take part in the election in huge numbers stressing on their participation in the elections of Panches and Sarpanches. “This will help in women empowerment in a big way”, he added.

The Chief Minister wished, peace, prosperity and well being of the people of in the 2011 and years ahead.