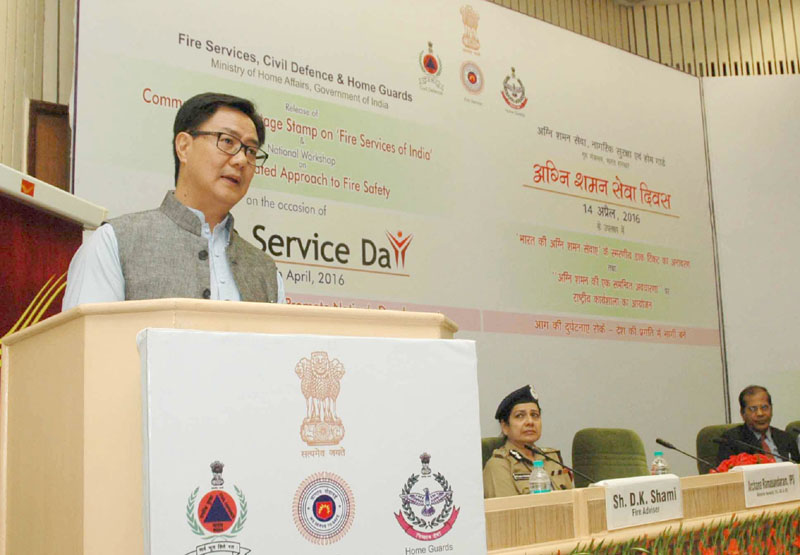 The Minister of State for Home Affairs, Mr. Kiren Rijiju addressing at the National Workshop on ‘An Integrated Approach to Fire Safety’, on the occasion of the Fire Services Day, in New Delhi on April 14, 2016.

New Delhi (PIB-GR-TYP-BIN): Minister of State for Home Affairs, Mr. Kiren Rijiju inaugurated a national workshop on “An Integrated Approach to Fire Safety” on April 14, on the occasion of the ‘Fire Service Day’. Mr. Kiren Rijiju said that the efforts put in by the firemen invariably do not get reflected. The job of firemen is so difficult that it cannot be performed effectively, if proper equipment is not provided to them, he added.

Mr. Kiren Rijiju said that the Fire Services, Civil Defence and Home Guards are working together as first responders to the disasters and form an integral part of the disaster management system. He said that they play a vital role in preparing community for disaster management by imparting appropriate training to them. A trained community responds well in cases of disasters and also helps in effective relief and rescue work, he added.

Mr. Kiren Rijiju said that the National Workshop on ‘An Integrated Approach to Fire Safety’ is a positive step towards sharing of knowledge and technology among the various stakeholders in the country. During the event, a commemorative Postage Stamp was released on ‘Fire Services of India’ to mark the importance of the Fire Services Day.

The event started with lighting of lamp, followed by a documentary on the devastating fire on SS Fort Strikine ship in the year 1944. Two minutes silence was observed in the memory of sacrifices made by the firemen during that incident.