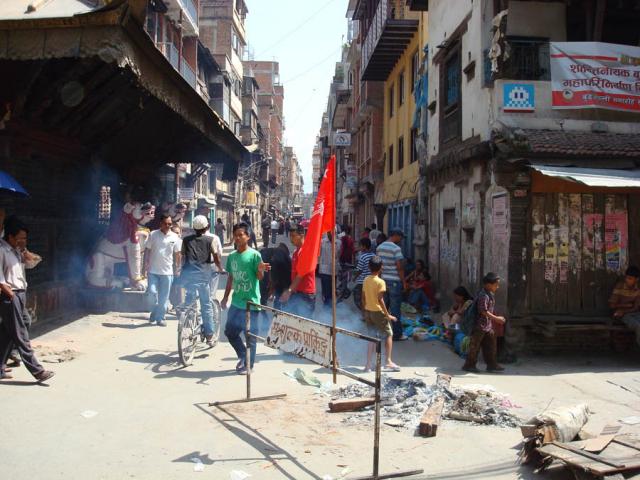 Kathmandu, Nepal, June 15, 2009: The Young Communist League (YCL) a sister wing of the Unified Communist Party of Nepal (Maoist) organized a shut down and demonstration program in and outside the valley in protest of the death of Rajendra Phuyal, the YCL in charge of Kathmandu Constituency-7. With no prior notice the YCL announced a sudden shutdown program on Monday, where the normal life of the people was completely stalled and obstructed. Citizens were seen confused and oblivious where foreign tourists were forced to move on legs. From the early morning, the YCL and Maoist cadres had blocked roads completely halting the vehicular movement and demonstrated by burning tires and chanting anti government slogans. The presence of the party was felt very strongly where the cadres forced the shops to closedown. Similarly, in a many encounters many people suffered the consequences where Krishna Neupane (a Journalist at the Avenues Television) and Dr Roshan Raut (a doctor at the Sahid Gangalal National Heart Center) motor bikes were vandalized. According to the UCPN, Maoist, “Phuyal was found unconscious in Balaju area of the capital on Thursday. For more than a week the deceased was out of contact from his family, friends and most importantly his party where all his well wishers were informed about the death after the post mortem. Phuyal was declared dead after arriving at the Tribhuvan University Teaching Hospital so it’s not natural and we suspected a foul play.” The party has further charged the disappearance and death of Phuyal to be carried out by Youth Force another youth wing affiliated to the current government leading Party Unified Marxist Leninist (UML) which had recently launched the youth wing against the YCL. Police Force in view of the issue said, “Phuyal was found unconscious in Balaju on Thursday where he was rushed to Tribhuvan University Teaching Hospital and upon arrival he was declared dead reasoning his death to have occurred from a poison. Further investigation is on relating to the circumstantial evidence. ” From killings to shutdowns to power politics, Nepal faces a new turmoil where its future lies at the stake of its leading political parties. Nevertheless, with the frequent violence, killings and vandalizing properties happening around, it had adapted as an effective tool for politics where the general public is bound to suffer the consequences. By Shreedeep Rayamajhi

Filed under: Politics, World
Share Tweet Pin G Plus Email
previous article: From Opium to Extortion, How the Taliban is Funded
next article: Q’orianka Kilcher goes to Peru and finds racism but also hope