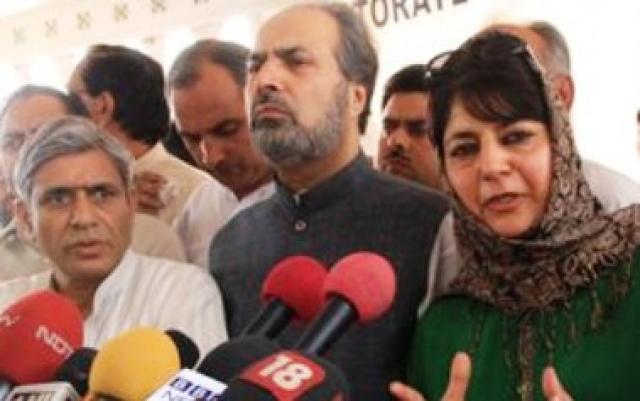 Srinagar, December 7 (Scoop News) – Peoples Democratic Party (PDP) president Mehbooba Mufti today said that on the one hand harassment of innocent people have been going unabated while on the other government has been looting public exchequer due to lack of transparency and accountability.

Addressing meeting of the district committee members of district Badgam, PDP president said that developmental activities have virtually come to stall still and ruling elites have been indulged in corrupt practices.

Charging National Conference (NC) led regime with brazenly taking benefit of the prevailing anarchy in the State, she said that instead of addressing problems of the people this regime has been indulged in corrupt practices.

She regretted that present government has been repeating the same blunders which were committed by the previous National Conference regime from 1996 to 2002. She further regretted that instead of creating job avenues for educated youth of the State, members of the ruling party have been brazenly auctioning the government jobs to mint money. She said that in the name of recruitment relatives of NC leaders have been recruited on jobs.

Taking a dig at ruling party for not properly implementing central sponsored schemes, she said that amount sanctioned by the Centre for poverty alleviation schemes being pocketed by the leaders of ruling party. She further added that discriminatory and pick and choose policy also being adopted by the state government in sanctioning funds for developmental activities.

Pointing towards continues harassment of innocent people, she said that cosmetic steps taken by the government have proved farce and there was no accountability at grass root level. The PDP president said failure of the state government to protect dignity and honour of the people illustrates callous face of this regime. She said it had become a norm for the police to arrest people, especially the youth without reason and in most cases for making money out of the current crisis.

Speaking on the occasion, district president of PDP Saif Ud Din Bhat said that present government has failed to even ensure supply of basic amenities. He mentioned that during the last two years this regime has done nothing except lip services to solve day today problems of the common masses. He pointed out that failure of the state government to make Branwar Power House functional despite being the fact that adequate funds have been sanctioned for it. He further regretted government has failed to ensure supply of basic amenities in Shai dominated areas even after starting of the holy days of Moharram Ul Haram.