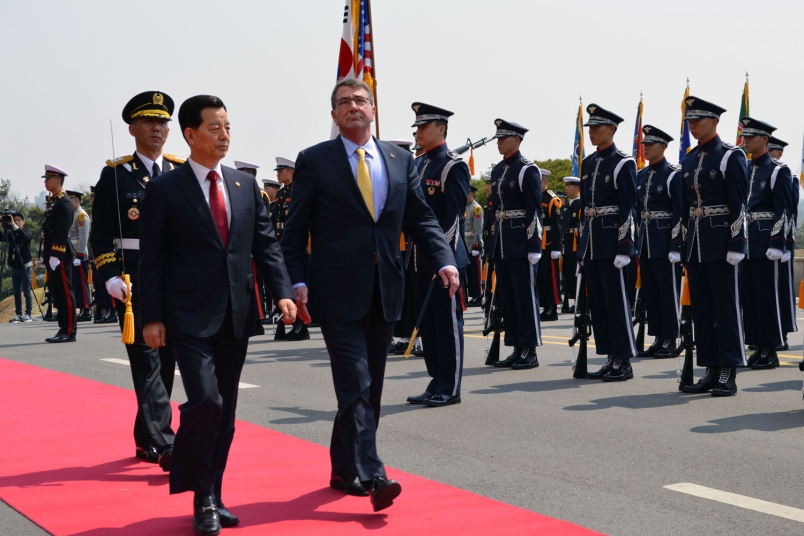 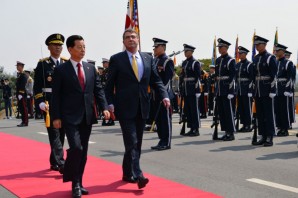 Minister of Defense Han Min Koo receives the US Secretary of Defense Ashton Carter in Korea on April 10, 2015. .

On April 10, 2015 Minister of Defense Han Min-Koo spoke to reporters regarding his meeting with US Defense Secretary Ash Carter. Here is some of what he told reporters:

“Secretary Carter and I discussed today various ways we can work together to effectively respond to North Korean provocations and threats while maintaining peace and stability on the Korean Peninsula.

We also recognize that North Korea’s recent cyber hacking attacks, bellicose rhetoric towards the ROK, and other threats constitute acts of serious provocation. We have agreed to cooperate closely in order to develop response measures against North Korean threats, as well as manage the security condition on the Korean Peninsula.

Secretary Carter reaffirmed the United States’ resolve and support for the ROK-U.S. alliance and the defense of the Republic of Korea, while further emphasizing America’s unwavering commitment to its rebalancing strategy towards the Asia-Pacific.

In light of this, I assessed that the United States’ strategy to rebalance towards the Asia-Pacific will contribute to promoting the peace and stability on the Korean Peninsula and in Northeast Asia.

Secretary Carter and I reaffirmed that we will continue to work together on reinforcing the alliance’s comprehensive capabilities in response to North Korea’s nuclear and ballistic missile threats.

We also recognized that the conditions-based wartime OPCON transition agreed upon at last year’s 46th security consultative meeting will reinforce an ROK-led combined defense by ensuring a stable OPCON transition. In that regard, we agree to implement relevant measures in a seamless manner.

With regard to cyber cooperation, Secretary Carter and I noted the achievements of close ROK-U.S. coordination on the cyber attacks on Sony Pictures last December. Furthermore, we decided to reinforce our cooperation in response to North Korean and international cyber threats.”

See related video: North Korea closer to having a Nuke that could hit the U S West Coast (Jan 08, 2015) https://www.youtube.com/watch?v=fxcGdTYUoOM