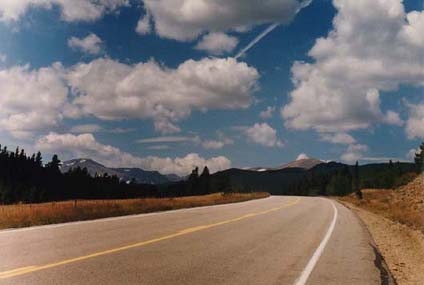 EXT. I-70 — AFTERNOON
We see various images of the blank Kansas plains.
Credits appear over action.

CLINT
Have you guys ever been with a black girl.

ERICA
Not yet-
We settle on the long interstate. Out of the heat waves of the dusty, hot asphalt a jalopy white and brown RV rises. Engine roaring, it comes toward us.

CLINT
Check this. I was at the nine-oh once. No bull-shitting, this chick came up to me and was like,”I want to fuck you.” Dude I slammed up Jack and Coke so fast.

INT. RV — CONTINUOUS
Music plays under CLINT’s (20s) mindless banter.
A college flag is on a wall-papered wall.
“BUBBA’S DEEP SOUTH BBQ” wrappers fill the area. Half eaten fried chicken and chili cheese fries and other nasty food lays about the kitchenette.
Cowboy hats and other ornaments bounce around on the rear view mirror and dashboard.
From the back we watch the endless interstate and Clint and JONNY’s(20s) animated interaction.

CLINT
We headed down an alley and start grinding hard core. I say, fuck it, I’ve never been with a black chick so I can’t let this opportunity go so I did the pull out.

JOHNNY
The pull out?

In the rear of the RV the girls, ERICA and CHELSEA(20s) are reading tabloids, they switch magazines. Chelsea shakes her head annoyed, Erica offers a knowing look.

CLINT
Yeah dude. I just pulled it out man. Right there in the alley.

CLINT
It gets good let me tell my story

CHELSEA
You haven’t shut up once since LA.

CLINT
Nah, this one’s good don’t be a bitch.

CHELSEA
Seriously. Screw you. You know what? Forget it. It’s a lost cause. You can’t not-

ERICA
She means Clint can’t shut up… its not possible.

Clint talks to them by way of the rear view mirror.

CLINT
Fuck you guys. You think you know me so well? I can shut the fuck up. This is a good story, but it can wait. I’m not going to talk the rest of the trip.

CHELSEA
I will pay for your cut of the gas if you can. I haven’t been able to think in three days. With all your stupid….

ERICA
This is stupid, none of us can do this.

JONNY
Okay, okay. How about this. Quiet Game. First one to talk-

ERICA
So are you. Are there rules?

INT. RV — MOMENTS LATER
The girls read magazines in the back, Chelsea is finally relaxed. Erica gets up to mix a drink.
In the front, Clint happily rocks out to the music, with Jonny drumming the dashboard, stealing eager glances in the rear view mirror. A look crosses his face.
Clint squeezes Jonny’s shoulder and motions to him. Jonny takes the wheel and the two switch positions without stopping the car.
Clint squeezes into the rear, stretching. He gets Erica’s attention and motions for a roll of toilet paper. She makes a fake grossed out face and passes it to him jovially.
Chelsea smiles smuggly behind her magazine.
Clint goes in, shuts the door. For a moment everything’s peaceful, when suddenly there’s a commotion from the bathroom. Everyone looks over, as Clint bangs the walls and door from inside the small room. He comes out. SLAMS the door.

CLINT
(mouths, subtitles)
WHAT THE FUCK?

He is pissed, he grabs a confused Erica to show her something and flings the bathroom door open thrusting her towards the toilet.

INT. RV BATHROOM — CONTINUOUS
The most nastiest, disgusting bowel covered toilet ever. It is intensely clogged, crap spews over as if its been sploshing around onto the bowl, sink and walls from the bumpy ride.
Erica covers her mouth and pushes away

INT. RV — CONTINUOUS
She almost falls backwards and looks at Clint in disgust.
He laughs silently, mouthing obscenities and making the “SUCK IT” sign with his arms.
Erica leans over the sink

He motions that he is innocent of the mess.
In the front Jonny watches the scene.
Erica tries to hit Clint, spitefully, as he continuously mocks her.
Jonny laughs.
Everyone turns.

Chelsea looks disgusted.
Clint smug face suddenly looks sick. He grasps his stomach and it GURGLES, he looks at the bathroom.
Chelsea laughs, mocking him.
Realization crosses his face. He jumps to his feet and runs to the bathroom door. He SLAMS it again.
Erica and Jonny just laugh, dismissing the altercation. They continue their song.
In the back, Clint accuses Chelsea silently. She denies, poised, satisfied that he can’t speak. He flings remnants of their lunch at her. She bats them away.
They fall into a physical fight. It’s getting dirty.
Jonny and Erica quiet down, the radio still plays, broadcasting a tornado approaching the area.
The fighting sounds stop and they look back.
Clint and Chelsea are passionately kissing.
Erica and Jonny start up the singing again, louder and more annoying than ever.
Clint throws something at Jonny and looks hungrily at Chelsea, she looks at him intensely. He pulls her into the back bedroom and they shut the door.

EXT. I-70 — NIGHT
The RV roars down the road, all lit up. It passes another sign, “NEXT REST STATION 25 MILES. ”
Off screen we begin to hear panting, and the russling of the bed.

INT. RV — CONTINUOUS
We fast cut to Erica and Jonny, looks of shock back to the bedroom door.

We zoom into the door and cut to: