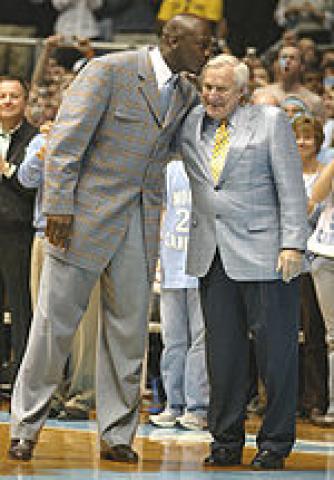 ‘Marcus Jordan, son of the Bulls’ six-time champion, scored a game-high 19 points to lead Chicago Whitney Young to a 69-66 victory over Waukegan in the Illinois class 4A championship Saturday’, Yahoo news reports

Tears of joy flow from the elder Jordan’s eyes as his son’s team mates celebrated victory on the court.’ Crying? the NBA great said in response to a reporter’s question. “I’m not crying, not for me, anyway”

The younger Jordan sunk in four free throws out of four attempts in the final minutes of the game for a 100% free throw finish. Marcus was sent in at the homestretch as two of his teammates fouled out. His final shots sealed the victory for his team.

Michael Jordan was born in Brooklyn, New York on February 17, 1963. He played as a shooting guard in the NBA. He played for Chicago Bulls and Washington Wizards

During his active playing years with the NBA, Michael Jordan was five-times NBA Most Valuable Player (MVP) and six-times NBA Champion with a long list of other major awards from the NBA