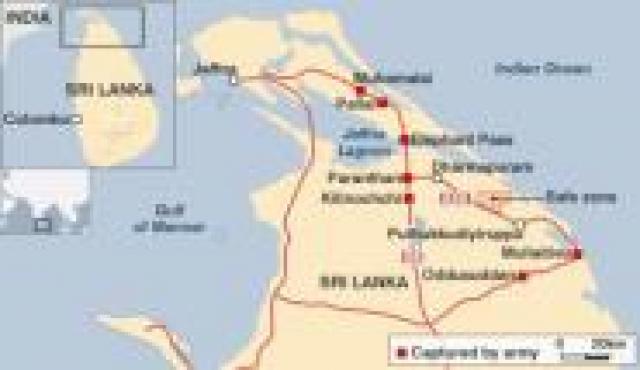 UN And ICRC to negotiate with Sri Lanka, LTTE for safety of civilians

Colombo : Sri Lankan Government set 48- hour deadline  for LTTE to allow trapped Tamil civilians to cross over. Just hours left for finish the due,there was barely a trickle of outflow, forcing international aid agencies to attempt a last-minute agreement. Tamil Tigers’ stood rigid to their stand that there were not holding civilians forcibly, to be no movement on the ground.

ICRC spokeswoman Sarasi Wijeratne said "We are negotiating with both the parties (government and rebels) to the conflict to work out a safe passage for many more patients who need urgent medical treatment,".

yesterday after negotiations with the LTTE, the ICRC and UN evacuated 350 wounded civilians, including 50 children.There are number of UN and ICRC vehicles still stranded in the areas held by Tamil Tigers’, these vehicles could be used to bring more wounded out to ‘safe zones’.