From card games to gang violence, Lagos is being affected in two very different ways.

The highly acclaimed and ever innovated Monopoly game captures the contrasts of Lagos in its first special edition dedicated to an African city. The most expensive property in this game launched last December, is called Banana Island, an artificial island that houses the great fortunes of the country. Makoko is the more affordable, floating slum nicknamed “Little Venice” of Lagos. Even Chance cards have a local color; a player may be admitted to psychiatric hospital for bad driving and can worsened in the famous lagotian traffic.

Among the promoters of Eko Atlantic are numerous banks. They will have invested billions by 2020. 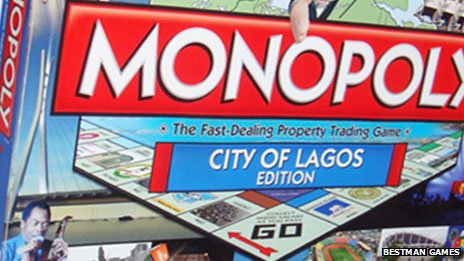 Lagos traffic jams are famous throughout Africa. They can last for hours, both morning and evening. Nevertheless, the city has modernized at great speeds, especially with the birth of Eko Atlantic, an impressive neighborhood risen from the water.

Crazy, extreme, Lagos swallows its visitors, stunned by its contrasts while increasing the numbers of women working in leadership positions. Several female entrepreneurs in particular are working tirelessly to increase women’s stake in the industry.

On one hand, it can be an urban hell. A city that is spread by the sea, sweltering, polluted and congested, with its 15 million inhabitants. On the other hand, infrastructure and new neighborhoods continue to sprout, such as Eko Atlantic which is colored with with modern buildings, palm trees, three marinas, parks, shops. The peninsula extends over nine square miles in the Atlantic by a process of filling should reach completion in 2015.

Eko Atlantic, funded by private investors, is probably the project that best embodies the Lagos of tomorrow, but the 2nd most populous city in Africa (after Cairo) is a mosaic where the most extreme slums are posh neighborhoods guarded by armed men.

In recent years, Lagos has become a new object of curiosity for Western architects and planners. Some say that behind the apparent disorder, it has potential to be a model city, even futuristic, which is built from the urban chaos.

Half a century of independence – Nigeria was a British colony until 1960, marked by a succession of military coups, civil war and corruption that plagues the Nigerian economy has accentuated the gap in Lagos between the rich and the poor. Renting in the new districts is now unaffordable for the majority. Slums are demolished under the pretext of inadequacy, most likely due to real estate speculation. For the people deported to Lagos, life is a daily struggle with unattainable dreams.

The city was abandoned by the Nigerian authorities after the creation of a new capital, Abuja, in 1991, and has long trailed a bad reputation. Its dilapidated roads had become the territory of gangs of thugs, who rage at night and sometimes even in broad daylight. Though there is some light as Mr. Femi Hamzat, commissioner for works, has said this about the new construction plans in Lagos, “If you don’t do them, people will not move around the state into the inner roads. Right now, we are fixing the expansion joints on Eko Bridge. That bridge could collapse if we don’t maintain it. It is costing us about 500 million Naira. So are we going to fold our arms because the federal government is not doing it. We have done 19 of them now and we are on the 20th and 21st, after which, we will do the bearing,” he said.

Filed under: Gaming, Lifestyle
Share Tweet Pin G Plus Email
previous article: Choose these Airports for Winter Travel & Reach Your Destination in Time
next article: Iran is the “foremost supporter of terrorism in the world”, says Congresswoman Ros- Lehtinen