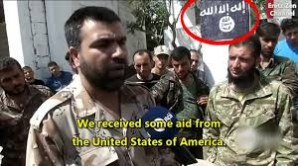 A “vetted” member of the Syrian rebels quoted in Youtube as saying “we received some aid from the United States.” Oops he is also a bloodthirsty commander of an ISIS terrorists group suspected in dozens of war crimes and acts of murder(note flag in backdrop). The likelihood that US weapons “could”  fall in the hands of ISIS – is really not in doubt by anyone except certain members of Congress who voted in favor or arming the rebels.

On September 22, 2014 Senator Jerry Moran of Kansas sent me the following message by email regarding the terrorist group ISIS (aka: The Islamic State of Iraq and Syria). It read as follows:

“This week, Congress voted on a continuing resolution (CR) to keep the government funded through December 11. Continuing resolutions have become the norm on Capitol Hill over the last few years as Washington consistently fails to fulfill its basic duty of passing annual appropriations bills. The CR included an amendment to provide $500 million in funding authority for arming and training Syrian rebels in the fight against the Islamic State of Iraq and Greater Syria. (ISIS). I voted against passage of the CR because I believe ISIS is a real threat to the safety and security of Americans. The U.S. response and policy toward ISIS deserves more than a few sentences in a $1 trillion stopgap spending bill passed moments before adjournment for the mid-term elections.

The Administration has portrayed that we are taking action to reduce the viability of ISIS, while it is more likely we are arming and training rebels that will ultimately use the weapons against our allies. There must be a discussion about the safeguards needed to ensure we aren’t arming the next Taliban or Al Qaeda 10 years down the road. These weapons could also quickly fall into the arms of ISIS – one must only look to the terrorists’ success overrunning Iraqi troops to gauge the likelihood of these weapons being used against us.

While I believe forceful and effective action must be taken to successfully confront ISIS, our course of action deserves a full and open debate by Congress for the benefit of the American people. Too many Presidents have begun a battle trying to convince Americans that not much will be required for victory and that we can have success without sacrifice. The fight against ISIS must be well planned and thought out in order to earn the support of the American people.”

Note: Senator Moran seems to appreciate the fact that arming Syrian rebels is a bad idea. I wonder if he releases the role the Obama Administration (and Congress) played in the creation and funding of ISIS to begin with?

Filed under: News, Terrorism
Share Tweet Pin G Plus Email
previous article: The David Thorne Case To Be Featured On New A&E Series
next article: Congressman Ed Pastor’s letter regarding the recent escalation of violence in Israel and the Gaza Strip