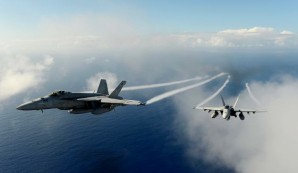 US F-18 warplanes tasked to participate in targeted air strikes in Iraq . These planes believed to have come from the US Aircraft carrier George H.W. Bush. on Friday August 15, 2014. Note the laser guided 500 pound Joint Direct Attack Munition (JDAM) bombs underneath the wings.

During a Pentagon news briefing on August 14, 2014 Rear Admiral Kirby talked briefly about the targeted air strikes in Iraq, in response to a reporter question on the subject:

Right now, the focus of those strikes has been up in the north near Erbil. Out of the 25 airstrikes that we’ve conducted to date, about half of them have been designed to hit ISIL targets in and around Erbil with respect to the protection of U.S. personnel and facilities, and about the other half were conducted in and around Mount Sinjar to blunt ISIL’s activities there with respect to the refugees.

But — so that’s the focus of the strikes. And I wouldn’t speculate about future operations. And you know I can’t do that right now. We still have assessment teams on the ground. We’re still gaining the benefit of their knowledge and their observations, and we’ll just keep at it.”